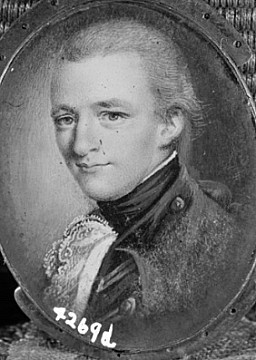 He was born at Kirtleton, Dumfries-shire in Scotland. When he was nineteen, he was commissioned as a Lieutenant into the 17th Foot and came to America, serving throughout the Revolution. He was wounded at the Battle of Princeton before losing an eye at the Battle of Stony Point. He surrendered with Cornwallis at Yorktown and at Newburgh he was sent to negotiate a truce with Washington. He later recalled that he had never been so much impressed by any man as by Washington - and he'd met both Napoleon and Wellington too. His opinion was that a country fighting under such a man could not fail to win. Also at Newburgh, he fell in love with the Hudson Valley countryside and at the end of the hostilities he settled in Manhattan.

During the War of 1812, he served as Assistant Military Secretary to Sir George Prevost and was appointed Colonel of the Nova Scotia Fencibles, but later in life he was naturalized as an American citizen. He collected guns and pistols, among them the pair of pistols, made by Twigg, which were used in the Burr-Hamilton duel in 1804. His grandson recalled that, "the seconds came to him to borrow pistols, as he was known to have the best in New York. The one that shot Hamilton is marked with a cross. My grandfather was much annoyed at having one of his handsomest pistols marred by this cross cut on the butt, which he considered a liberty, and some rather acrimonious correspondence ensued on the subject". He married his first wife, Christian Amiel, by whom he was survived by two sons. In 1793, he married Margaret Marshall and had four children. He had a quick temper and was described as "a peppery old gentleman" before he died in Paris, France.