Built in 1767, for Major Abraham Mortier (d.1775), Paymaster-General to the British Army in North America, and his wife, Martha Naden (d.1787). It was the final house in New York built by Peter Harrison (1716-1775), "the first professionally trained architect to bring Palladianism to America". Richmond Hill was described as, "a mansion of massive architecture, with a lofty portico supported by Ionic columns, the front walls decorated with pilasters of the same order, and its whole appearance distinguished by a Palladian character of rich though sober ornament." It was home to a series of distinguished American names: George Washington, John Adams and Aaron Burr before being purchased by John Jacob Astor and becoming a theater and opera house....
zoom_in 3 images 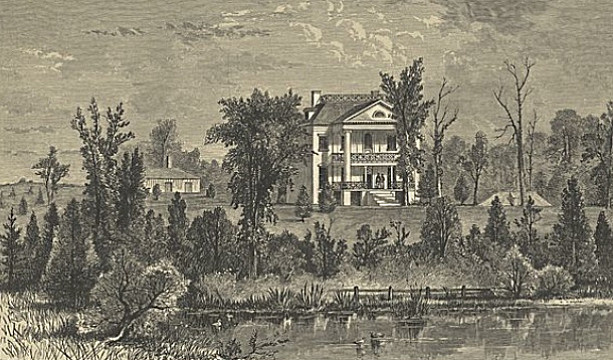 In 1766, Mortier leased the 26-acre "King's Farm" from Trinity Church for a period of 99-years. In today's terms, his estate was bounded by Charlton, Vandam, King and Sixth Avenue, and he built his mansion on the east side of King Street. At that time, the mansion was considered to be a mile north of the city and stood on an eminence (later flattened by Astor) that allowed sweeping views of the Hudson and refreshing breeze.

During the French & Indian War, the Mortiers offered their home Lord Amherst as his headquarters. Between June and September, 1776, George Washington made the house his headquarters during the Revolution and the by then widowed Mrs Martha Mortier (a staunch Tory) was afterwards said to have been, "generously compensated". When  Washington left, it was taken over by the British until the evacuation of New York in 1783.

Seat of the Vice-Presidents

Mrs Mortier died in 1787 and two years later her daughter, Elizabeth (the wife of Goldsbrow Banyer) leased the property to the government as the official residence of the 1st Vice-President, John Adams. His wife, Mrs Abigail (Smith) Adams, said of it that: "In natural beauty it might vie with the most delicious spot I ever saw". They were there for one year before the capital moved to Philadelphia and they took up residence at Bush Hill.

In 1794, Richmond Hill was acquired by Aaron Burr who until then had been leasing it from Mrs Banyer. He borrowed vast sums of money redecorating the mansion and improving the estate, blocking off the Minetta Creek to create an ornamental pool near the main entrance. It was from Richmond Hill, while serving as Jefferson's vice-president, that he was transported by carriage to that fateful duel with Alexander Hamilton that finished his career. After the duel, his reputation was ruined and unable to keep up with his repayments he broke up the estate to sell off in lots. The lion's share, including the mansion, was sold that same year (1804) to John Jacob Astor for $32,000.

In 1820, Astor put the mansion on logs and rolled it down hill to Charlton and Varick Streets where it became the Richmond Hill Theater & Opera House. The hill on which it had stood was levelled and Astor laid out new streets which were leased or sold to developers. The Richmond Hill Theater became a saloon before it was demolished in 1849.