Completed in 1852, for Gustavus Swan (1787-1860) and his wife, Amelia Aldrich (1785-1859). It was designed by Alexander McGregor and is situated on the southwest corner of Bellevue Avenue and Webster Street. It was one of the first twelve mansions put up on Bellevue Avenue and remained in the same family until 1928 before being gifted to the Newport Art Association. The carriage house became the Swanhurst Theater but both have since been converted into private homes....
zoom_in 5 images 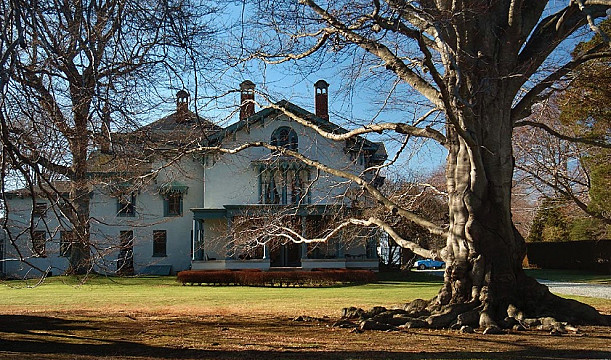 Gustavus Swan and his wife were both natives of New Hampshire. Having made their home in Columbus, Gustavus was elected to the Ohio House of Representatives becoming an Associate Justice of the Supreme Court, active in the construction of railroads, and the first President of the State Bank of Ohio. Their two sons died young leaving them with two daughters who both made fortuitous marriages: Jane, married the first millionaire in Columbus, George McClellan Parsons; and, Sara married Augustus Whiting of New York. Through their daughters, the Swans were the grandparents of the Princess zu Lynar and the great-grandparents of Lady Innes-Ker and the Countess of Ancaster.

Their summer home is built of stone and covered in stucco, but they weren't to enjoy it for long. Just three months after his wife died, so too did Judge Swan in 1860. The house was then inherited by their younger daughter, Mrs Whiting, who named it "Swanhurst" (a 'hurst' is a wooded hill in old English) in honor of her late father.

Swanhurst shot into the headlines in 1882 when Mrs Whiting's daughter 'Sallie' was married here to Oliver H.P. Belmont - the same who built Belcourt after their scandalous divorce. The marriage was one of the most prominent society matches of the year, but Oliver's mother had her reservations from the start, writing to her husband: "tho' Sallie has very bad manners, she is liked, and said to be very amiable, and has money, which will be absolutely necessary for Oliver with his extravagant tastes. The great objection in my eyes is that he is too young and does not yet know how to take care of himself, but I don't believe he ever will." His maturity - or lack of it - was made immediately evident on Honeymoon in Paris: he unleashed an absinthe-fuelled tirade against his terrified new wife before walking out on her to go gambling and whoring and then ditching her altogether for a dancer with whom he hot-footed off to Bordeaux... They divorced in 1883.

The Reign of the Rives

Mrs Whiting died in June, 1894, and just one month later - before her will was settled - her only surviving son, Augustus Whiting Jr., also dropped dead. Augustus Jr. had been a well-known figure in New York and Newport society, described as "a solid clubman" and a coaching enthusiast who could, “could crack a whip with the best of 'em ".

Swanhurst now became the summer home of the former Mrs Sallie Belmont who was by now happily remarried to the eminent and reliable George L. Rives, a close friend of the celebrated architect Charles McKim who built the stables here in 1894. Rives was as well known in Newport for his civic activities as he was in New York: he was Vice-President of the Newport Improvement Association; a co-founder of the Spouting Rock Beach Association; Director of the Newport Historical Society; Secretary of the Newport Casino; and, a member of the Newport Reading Room and Newport Country Club.

Sallie's daughter by Belmont, Natica (a god-daughter of Mrs Astor and one of her "favorites in the younger set"), had summered here with the rest of her family up until her debutante year in 1904, but then retreated from society. The explanation first given in The New York Times was that her mother, "did not approve of the social atmosphere of the city by the sea for young girls.” It was then reported that in 1906 Natica, "broke down as a result of too active participation in social affairs... and was quite ill for several weeks". In January, 1907, while receiving treatment, Natica became engaged to William P. Burden. They were married in a quiet ceremony before which Natica had been living in a hotel with a trained nurse after, "a mild attack of nervous exhaustion, and it was deemed best by Mrs Rives that her daughter should be away from the confusion incident to the wedding preparations". Apparently accidentally, Natica died in her sleep ten months later.

George Rives died in 1917, at which point Sallie gave Swanhurst to their youngest daughter, Mildred, for the remainder of her lifetime at which point the house was to be gifted to the Newport Art Association. Mildred and her husband, Frederick M. Godwin, divided their time between here, Manhattan, and Cedarmere on Long Island but sadly their tenure at Swanhurst wasn't to last for long. In 1927, Mildred died while giving birth to a son and by the following year (1928) Swanhurst had become the property of the Newport Art Association. From 1932, it became home to the Swanhurst Art School while The Players Guild, the Rhode Island Shakespeare Theater and the Swanhurst Chorus performed in the Swanhurst Theater that had been created in the former carriage house.

In 1987, the Art Association converted Swanhurst back into a private home and sold it back into the private sector; and, in the following year the Swanhurst theater was sold separately for condominium development. The 7,600-square foot house plus its contents that included a broad range of antique furniture and decorative arts was last listed for sale in 2013 with 1.5-acres for $4.4-million and is now available to hire throughout the year. The carriage house was last sold as a separate private home in 2016 for $3,271,000.