Built in 1896, for Elisha Dyer IV (1862-1917) and his wife Sidney Turner (1857-1933). Located on Bellevue Avenue next door to The Elms, in comparison to its neighbors (Belcourt, Clarendon Court, Marble House to name only a few), it is plain and decidedly lacking in character. Yet, the man who built it was considered the one of the most popular men in Newport; the best dressed man in Newport; and, an expert dancer. Since 1975, Wayside has been operated as the Wayside Guest House....
zoom_in 2 images 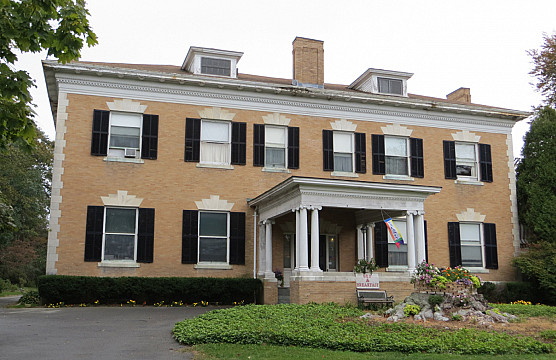 Elisha Dyer was descended from a founder of the Rhode Island Colony and both his father and grandfather had served as Governors of Rhode Island. He himself was a private banker in New York and a member of Mrs Astor's hallowed "Four Hundred". Always immaculately turned out, Dyer was considered the best dressed man in Newport. His wife, Sidney, was a grand niece of Susan May Williams who made her home at Montrose with her husband Jérôme-Napoléon Bonaparte, nephew of Emperor Napoleon I of France.

"A Queen Anne Front, and a Mary-Anne Behind"!

In 1891, six months before her marriage to Dyer, Sidney purchased a one-acre plot of land that contained the original 'cottage' known as "Wayside". Located off Bellevue Avenue, she acquired it for $10,000 from Edward Julius Berwind, of The Elms. Five years later (1896), the Dyers demolished the existing house and replaced it with a Colonial/Georgian-Revival mansion of sand-colored brick with black shutters. It wasn't to everyone's approval and Mrs Dyer never forgave Tessie Oelrichs of Rosecliff whose voice was carried into the garden remarking to a friend: "There it is. A Queen Anne front, and a Mary-Anne behind!" Their new summer home contained 20-rooms, including a ballroom where they frequently held large parties for the crème-de-la-crème of Newport society: Dyer was an expert dancer who led the intricate cotillions at the legendary balls hosted by William and Caroline Astor, both in New York and at Beechwood further along Bellevue Avenue.

Dyer died at Wayside in 1917 and three years later his widow carried out several improvements to the house. It is thought that she held on to it until her own death in 1933. Having no children, by the 1940s the house had come into the possession of Townsend Phillips (1905-1980) whose mother had purchased the magnificent marble mansion known as Whiteholme at Narragansett Avenue in 1944. Phillips divided his time between Wayside and Palm Beach, Florida. In 1950, he leased the house for the summer to Daniel Reid Topping, joint owner and President of the New York Yankees.

Phillips died in 1980 and by the following year Wayside had been acquired by Al and Dorothy Post who run it as the Wayside Guest House. The house maintains some original features such as the sturdy carved oak doors, fireplaces in most of the rooms and 15-foot ceilings, but any real sense of its once Gilded grandeur has been entirely lost.