Completed in 1903, for Mrs Mary Sloan (Frick) Garrett (1851-1936), the widow of Robert Garrett (1847-1896). Having stood at the corner of Narragansett and Ochre Point Avenue, Whiteholme was among Newport's most impressive French Neo-Baroque mansions put up during the Gilded Age. It stood just north of Vinland and west of Southside, and was the first residential project completed by architect John Russell Pope (1874-1937). Privately owned until 1963, it was acquired by Salve Regina University and torn down within weeks before being replaced by Miley Hall....
zoom_in 13 images 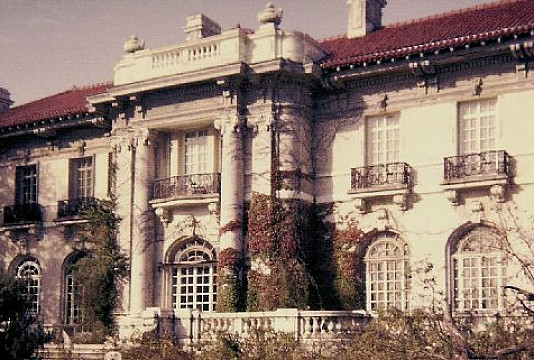 Mary's first husband, Robert Garrett, succeeded his father as President of the Baltimore and Ohio Railroad but resigned just three years later before being declared insane. In his final years, he was cared for at home in Baltimore by Mary and their physician Dr H. Barton Jacobs (1858-1939). Robert died in 1896 and in his honor Mary established the Robert Garrett Fund for the Surgical Treatment of Children at Johns Hopkins University. After a suitable three years in mourning, in October, 1899, she made it known that she had returned to society with the purchase of the Hitchcock-Travers Villa at Newport.

In 1901, Mrs Garrett employed the celebrated architect John Russell Pope (1874-1937) to enlarge and transform the old villa. A graduate of the École des Beaux-Arts in Paris and only recently returned from Europe, this was one of Pope's first commissions, and his first residential commission. He incorporated the original house into the new three story mansion that was designed in the Neo-Baroque style made popular in Paris during the reign of Napoleon III in the 1860s. The old house - covered in buff-colored stucco to match the new - now became the service wing attached to the back of the main structure, and contained the kitchen, serving pantry, housekeeper's office, laundry facilities etc.

The new mansion was built in an L-shape with an oval-shaped entrance hall situated in the internal corner of the 'L' while the gardens displayed a large number of geometrically laid out statues and fountains. The interior was finished in the French style of Louis XVI, by Jules Allard of Paris, and the ground floor was divided into four large reception rooms designed specifically for entertaining large numbers. Each of these principal rooms were built using different marbles: Carrara; Verde Antique; Gray Cippolino; and, Barchina. The  sunken garden and marble staircase was copied from the Petit Trianon in Paris.

In 1902, Mary married the same Dr Jacobs who had helped her care for her first husband. They divided their time principally between Newport, Bar Harbor, Paris, and their two mansions in the vicinity of Baltimore. After Mary died in 1936, she left her homes and $5.5 million to Dr Jacobs, but, rarely visiting Newport again, he died just four years later.

In 1944, Whiteholme was sold for $26,000 to Mrs Annette Phillips (1884-1965), the former wife of Marshall A. Phillips, Jr. (1882-1963). She was a great-great granddaughter of Elbridge Gerry, 5th U.S. Vice-President, and she was a cousin of Peter Goelet Gerry, U.S. Senator from Rhode Island and a prominent figure in Newport. At about the same time she bought Whiteholme, one of her two sons purchased Wayside and in 1950 her other son, Alexander, came to live with her here with his new wife, Mrs Frances Cary, and her two children by her first marriage. Her second marriage didn't last long either and she children returned to England while Alexander moved to another house in Newport.

Mrs Annette Phillips remained at Whiteholme until 1960 when she sold the property for $530,000 to Mr and Mrs Thomas H. Bilodeau, of Boston. In 1963, it was acquired by Salve Regina University who almost immediately demolished it to make way for Miley Hall, a student residence and dining hall. Before it was torn down, the wealthy preservationist Donald Tinney managed to salvage much of the original carved panelling that had lined the interior walls of the principal reception rooms and removed them to Belcourt Castle. Also salvaged were a pair of statues that had once been among many to have adorned the garden. They were acquired by J.C. Nichols and removed to Prairie Village in Kansas.

The Newport Experience: Sustaining Historic Preservation into the 21st Century By Jeannine Falino

A Good Family: A Novel By A.H. Kim