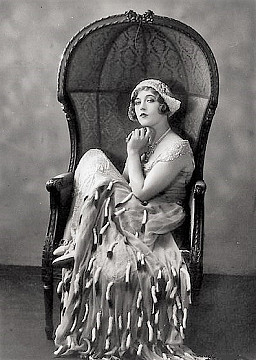 She was born in Brooklyn, New York, the youngest of four sisters. She was educated at the Convent of the Sacred Heart followed by a convent in France, but being unacademic and affected by a stutter she left to pursue a career as a chorus girl and adopted the stage name "Davies". Two years later,  at the age of nineteen, she made her debut on the silent screen and the following year (1917) wrote and starred in Runaway Romany, directed by her well-known brother-in-law, George Lederer. According to her memoirs, she became acquainted with the married media-mogul 34-years her senior, William Randolph Hearst, even before the start of her life in the movies.

In 1918, Hearst signed her to his production company and took over the management of her career which saw her appear in 29-films. Although her association with Hearst stunted what might have been a really great career (she was named "Queen of the Screen" in 1924), on a personal level it was to define the rest of her life, and her lifestyle. Romance blossomed during the early 1920s and though they never married, Marion would be Hearst's mistress - quite openly - until he died in 1951. Hearst is reported to have spent about $7 million promoting her career. Aside from giving her and her family a house in Manhattan, he built her Ocean House, a 110-room beach house at Santa Monica. While Hearst's wife preferred New York, he and Marion entertained at Hearst Castle as though they were husband and wife and during World War II they lived together at Wyntoon.

Despite first impressions, Marion and Hearst truly cared for one another. They had affairs, and Hearst never divorced his wife, but as Marion put it: "He gives me the feeling I'm worth something to him... he's kind and he's good to me, and I'd never walk out on him". When Hearst was in financial trouble, she sold all her jewellery and wrote him a cheque for $1 million. When he died, she was given 170,000 shares in the Hearst Corporation which gave her a controlling interest over and above his sons. She voluntarily gave them back to his sons without any recompense and retained only the trust fund he had established for her that was derived from 30,000 shares. Eleven weeks after Hearst's death she was married - unhappily - to Horace G. Brown who she only met after Hearst died and physically happened to be the spitting image of a younger Mr Hearst! Marion is alleged to be the mother of Patricia Lake who in life she referred to as her niece. She died leaving $20 million, having already given away several millions to children's charities.

The Times We Had : Life with William Randolph Hearst By Marion Davies

Polly of the Circus (1932) By (Starring) Marion Davies & Clark Gable