Built between 1919 and 1947, for media mogul William Randolph Hearst (1863-1951), it was a magnet for Hollywood stars and the political elite during the 1920s and 1930s, providing the inspiration for "Xanadu" in Citizen Kane (1941), the fictionalized account of Hearst's career by Orson Welles (1915-1985). The architect of this Spanish Renaissance colossus, Julia Morgan (1872-1957), became the first woman to receive the Gold Medal from the American Institute of Architects, albeit posthumously in 2014. Hearst Castle is among the country's most famous mansions, attracting over a million visitors a year to its isolated splendor at an altitude of 1,600 feet overlooking the undeveloped Pacific coast. The poet George Bernard Shaw was quoted as saying, "it was the place God would have built - if he had the money". The New York Times considered it "the most luxurious estate ever built," and it was selected as one of America's Ten Amazing Castles, by Forbes Travel: "Quite possibly the nation’s most famous castle, William Randolph Hearst went to great lengths to bring back the best of European architecture - most notably ceilings from churches and monasteries - which were pieced back together in California to create his highly eclectic Central Coast getaway"....
zoom_in 12 images 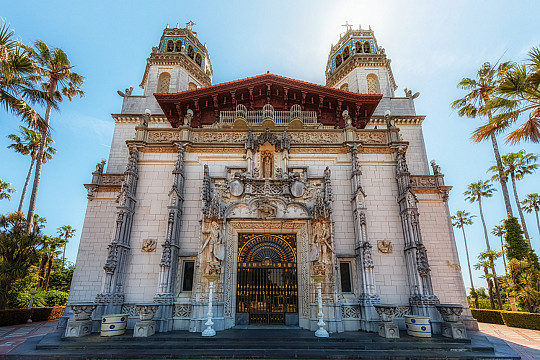 In 1865, Hearst's father, Senator George Hearst (1820-1891), purchased 30,000-acres of land within the Rancho Piedra Blanca from José de Jesús Pico (1806-1892). Soon afterwards, he built a large frame ranch house on his property that is still used by the Hearst family today as a retreat, though for their privacy it is screened from the tourist routes by a dense grove of eucalyptus trees. George continued to acquire further parcels of the surrounding land until his death, by which time he had accumulated an estate of some 250,000-acres that included fourteen miles of pristine Californian coastline.

George left his $19 million fortune and all his property to his widow, Phoebe Elizabeth Apperson (1842-1919). During her lifetime, she gained a reputation as a generous philanthropist and to that end wished to convert her 1,900-acre ranch at Pleasanton, east of San Francisco, into a farm for orphans. However, while she was away, her son (William) misappropriated the property and with neither her permission nor her knowledge commissioned and then proceeded to build the Hacienda del Pozo de Verona. When she returned and discovered what he had done she was unsurprisingly furious and never forgave him. Hearst would now have to wait until she died twenty years later in 1919 before he had the funds to commission a similar project.

In 1919, having long held a strong attachment for San Simeon where he'd spent numerous family vacations, he chose to build there. Rather than occupy his father's old home, he had initially been content to build himself a bungalow on a site where as a young boy he had pitched a tent many times. The site was spectacular: 1,600-feet above sea level on top of a steep hill within the Santa Lucia Range, commanding panoramic views on all sides of the surrounding countryside, including the Pacific Ocean that lay just five miles away.

Time for a Change

From 1908, Hearst had made his home in what was then New York's largest 'apartment,' Hearst's Clarendon, a 5-story castle hidden within a 12-story apartment block. However, by 1919 life in New York had become slightly claustrophobic for the press baron when two frequent visitors to the Clarendon during World War I were unmasked as German spies and he was hauled up to the Senate to explain himself. He had also started an affair the previous year with a Broadway actress 34-years his junior and - ironically - to escape hostile journalists etc., he left his wife (they later separated but never divorced) in New York while he and Marion escaped to San Simeon where they quite openly lived together.

Julia Morgan (1872-1957) clocked up a number of firsts as a woman in her lifetime, and among those milestones was her architect's license in California. With that, she immediately received the patronage of Hearst's mother. Mother and son enjoyed a close relationship, strengthened through their mutual passion for art and architecture that stemmed from a two year tour of Europe in 1873. Despite his many faults, Hearst looked upon women favorably and had a strong feminine streak to his nature.

In April, 1915, it was perhaps then of no surprise that it was to Julia Morgan that Hearst turned to with his idea for a Californian retreat. Within just one month, plans had snowballed from designs for a modest bungalow on to what would become one of America's most lavish and extensive homes - a monument to his mother and an attempt to fill the void she left in his life after her passing.

Having looked at various different styles, Hearst finally settled on a mixture of Spanish Renaissance and Baroque; having found colonial Spanish buildings in California too crude and Mexican colonial architecture too elaborate. However, in order to maintain a semblance of colonial Californian feeling, Hearst chose to front the castle with stucco rather than masonry. Due to the immensity of the project (it was reckoned that Hearst spent $30 million creating this retreat), Morgan wisely persuaded Hearst to start building the guesthouses before starting on the main structure, as they would take less time.

Hearst Castle was formally named "La Cuesta Encantada" meaning "The Enchanted Hill," though it was casually referred to by the Hearsts as "the ranch". The estate is in fact made up of four separate houses with 90,000 square feet of living space containing 165 rooms; including 56 bedrooms, 61 bathrooms, 41 fireplaces and 19 sitting rooms.

Started in 1922, the main residence is much larger than the others (60,645 square feet). Known as "La Casa Grande" (the Big House), it stands four stories high and is fronted by two towers with carillon bells inspired by the Church of Santa Maria la Mayor in Ronda, Spain. The three guesthouses are mansions in themselves, each containing between 10 and 18 rooms: "Casa del Mar" (5,875 square feet) faces the Pacific Ocean; Case del Monte (2,291 square feet) faces the Santa Lucia hills; and, "Casa del Sol" (2,604 square feet) looks west towards the setting sun. Each of them too is filled with treasures from Hearst's inexhaustible and diverse collection of art and antiques.

The numerous galleries are crammed with European art and statues while the 90 foot long library with its Spanish-Moorish ceiling and ascending shelves is filled with rare edition books. The visitor is treated to sights such as 400 year old Spanish and Italian ceilings, 500 year old mantel pieces, 16th century Florentine bedsteads, Renaissance paintings, Flemish tapestries, a dining table that seats one hundred guests, and much more.

It is impossible to summarise the many magnificent rooms, but on the whole they feature art deco, baroque and gothic architecture; with an array of arches, verandas and balconies that give way to sweeping views over the surrounding countryside. For one room, an entire Spanish monastery was bought, dissembled and shipped to California stone by stone before being reconstructed within the Casa Grande. In contrast to all the antiquity, the movie theater within the main house ran two screenings a night - once for the guests and once for the staff, always showing the latest releases from Hollywood.

The 127-acres of grounds included tennis courts and a garage for 25 cars. But, it was the exotic trees, zebras and other wild animals scattered around that made the scenery extraordinary. It possesses the world's largest private zoo and in Hearst's day Fahr goats, Berbery sheep, monkeys, cheetahs, lions, panthers and even polar bears were kept there.

There are two pools: The Romanesque indoor pool is laid out in a 'T' plan with mosaic and 22 gold carat gold tiles surrounded by Greek statues and globe lamps that create the impression of moonlight. The outdoor Greco-Roman pool is known as the 'Neptune Pool': it is perhaps the most photographed part of the estate and features an ancient Roman temple transported from Italy. The pool is surrounded by marble colonnades that manage to frame the main house, the mountains and the distant sea. It was rebuilt three times before it met Hearst's exacting standards.

Guests usually arrived by aeroplane - landing on the estate's private airfield - or by taking Hearst's private train from Los Angeles. Having been met and escorted to their rooms by staff, they were then briefed as to the protocol maintained by their host: They must watch a movie in the theater every evening; one drink before dinner; no drinks in their suites; compulsory attendance at the Great Hall for dinner every evening; no smoking at the table; no political discussions; no mention of the word "death" in front of their host; no philandering; and finally, to adhere to the ethos of early-to-bed, early-to-rise.

By 1947, Hearst had sold his "between-seasons home" - Beacon Towers - and was living between Casa del Mar and Wyntoon; but, being without ready access to the medical care he needed, he was unable to remain at "the ranch". He moved back permanently to Beverley Hills and work stopped on the uncompleted project - warehouses still contain treasures from European palaces and monasteries that remain in their shipping crates.

The Hearsts were survived by five sons. It was in 1974 that Patricia Campbell Hearst (b.1954), the third daughter of their son, Randolph Apperson Hearst (1915-2000), gained worldwide notoriety: after being kidnapped by a terrorist group she was brainwashed and joined them, taking part in a bank robbery for which she was jailed. In 2001, she hosted a Travel Channel show on the estate and in 2006 her niece, Amanda Randolph Hearst (b.1984), modelled for a fashion shoot at the estate for Town and Country magazine.

In 1957, in exchange for a substantial tax write-off, the Hearst Corporation gifted the Hearst San Simeon Estate to the State of California in memory of the creator and his beloved mother. However, they retained 80,000 acres and included a caveat that members of the Hearst family could use the estate when they wished. Since then, it has operated as a State Park and museum, attracting over a million visitors a year. In 1972, it was added to the National Register of Historic Places before being designated a National Historic Landmark.

If you are planning a visit to this spectacular estate, it is essential to make reservations in advance as the number of visitors on any one day is limited. Both day and night tours are offered, and both are recommended as they give completely different perspectives of the castle. It is open everyday except Thanksgiving, Christmas and New Years Day.

Hearst's San Simeon: The Gardens and the Land By Victoria Kastner & Victoria Garagliano

The Times We Had : Life with William Randolph Hearst By Marion Davis

In & Around San Luis Obispo By Barbara Wolcott

Hearst Castle: The Biography of a Country House By Victoria Kastner

The Garden on Sunset: A Novel of Golden-Era Hollywood By Martin Turnbull

The Only Woman in the Room By Marie Benedict

American Heiress: The Wild Saga of the Kidnapping, Crimes and Trial of Patty Hearst By Jeffrey Toobin

The Radical Story of Patty Hearst By CNN, Season 1