Completed in 1928, for Marion Davies (1897-1961), the openly accepted mistress of media mogul William Randolph Hearst. She bought 5-acres literally on Santa Monica Beach and then employed William Flannery (a set designer in Los Angeles) to build her a beach house with a guest house, staff house and two further houses. In 1926, Hearst also brought in his architect of choice, Julia Morgan - the first woman to be granted an architect's license in California - and connected up the houses before enlarging it as a whole to 110-rooms (many historically themed) on which $4 million was spent on the furnishings alone. For 20-years, it was a mecca for movie stars and was known as, "The Versailles of Hollywood". After 1945, it became an hotel and then a beach club before the house was demolished except for one guest wing. In 2005, after a grant from the Annenberg Foundation, a new structure echoing the old one was built in its place. Today, the new building and the original marble tiled pool are open the public....
zoom_in 20 images 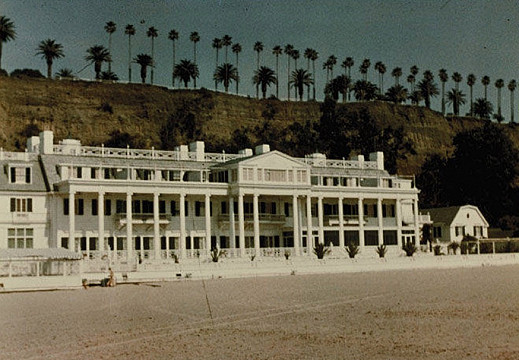 On first glance, Marion was a young, diminutive, unacademic actress with a stutter. That she was the mistress of a man 34-years her senior who was not only a multi-millionaire, but also one of the most powerful men in America may raise a suspicious eyebrow. But, Marion was not only devoted to Hearst, she repeatedly demonstrated that although the money was nice, it was absolutely not the lynchpin to their relationship, and in fact she made a name for herself as a very successful property developer in her own right.

Georgian Splendor on a Californian Beach

As a beachfront property, Ocean House - although spectacular - was quite incongruous. Under Julia Morgan and with significant input from both Marion and "W.R" (as she referred to Hearst), the principal ten bedrooms were designed in various different themes such as French, Dutch, Colonial etc. But, the rest of the house, both internally and externally, followed a principally Colonial-American/Georgian theme. The Dining Room featured portraits by Sir Joshua Reynolds of King George III and Queen Charlotte; other reception rooms featured panelling by the great 17th century English woodworker Grinling Gibbons; and many of the 37-fireplaces were marble and dated from the 18th century.

The most magnificent room was generally supposed to be the Gold Room with 18th century Venetian panelling that was compared with the glittering ballroom at Palace House, one of the Rothschild homes in London. This room featured the painting Marion cherished most - Arthur Atherley as an Etonian by Sir Thomas Lawrence - having not only picked it out as her favorite but then having bargained hard with one of the most wily art dealers in the world to get it a reasonable price. Charles Duveen had originally wanted something in the region of $600,000 for it, a price he said that Mrs Anna Dodge was only too happy to pay. But Marion got him down to a more realistic $140,000 - and the diminutive actress once again proved her mettle. When Mrs Dodge heard she'd been outbid, she flew into such a rage that she fell downstairs and broke her leg!

Depending on which account of the house you read, on completion the total number of rooms varied from 90 to 120. Of those room, 55 were said to be bathrooms and the house as a whole was staffed by a small army of 32-servants. The Director of the Detroit Institute of Arts commented on Ocean House in 1932: "the reception rooms in English style, only one in French style with four good pictures by Boucher (The Gold Room), a library with pictures by Rembrandt, Franz Hals etc. It is possible to show a film here, when a button is pressed there appears on the wall a canvas in a precious frame , at the same time two doors open up as on a cuckoo clock... Charming are the bedrooms (and) with the ocean in the background it is like being on a boat. Friendly, light-colored walls, gay curtains, and dark blue Chinese carpets fitting in astonishingly well with everything else...".

"The Versailles of Hollywood"

On completion, Marion's party-pad consisted of the main house, three guesthouses, two swimming pools and dog kennels all spread over five acres. The actress Colleen Moore famously called it, "the biggest house on the beach - the beach between San Diego and Vancouver"! The main 110-foot saltwater swimming pool was faced in Italian marble and the base is a Morgan-designed mosaic of goldfish all of which was spanned by a marble bridge loosely modelled on the famous 16th century Rialto Bridge in Venice, Italy.

Marian's neighbors on the beach at Santa Monica included Louis B. Mayer, Samuel Goldwyn, Mae West, Cary Grant and J. Paul Getty, who often wandered over for dinner or a swim. Ocean House was the scene of countless parties frequented by every great of the silver screen. Greta Garbo and Charlie Chaplin (rumored to have one of Marion's lovers) were regulars and in 1937 Marion and W.R. hosted a legendary 3-day party for which they borrowed a carousel from Warner Brothers. In order to have the carousel installed, Hearst had a wall knocked down in the house which was 'simply' rebuilt after the event.

With her best party-years behind her, Marion sold Ocean House in 1945 to hotelier Joseph Drown for $500,000 - the same amount that she had spent just on its imported fireplaces - and retired to Beverley Hills. It initially housed the Oceanfront Hotel before becoming the private Sand & Sea Club. Despite local opposition, the house was all but entirely demolished in 1956 except for one of the guesthouses (North House) which still stands and the marble pool. Following a grant from the Annenberg Foundation, both the guesthouse and pool have been restored, fixing the damage from the 1994 earthquake. A new house that echoes Ocean House (the Annenberg Community Beach House) has been built in its place and it along with the guesthouse and the marble pool are now all open to the public.

The Times We Had: Life with William Randolph Hearst By Marion Davies

The Garden on Sunset: A Novel of Golden-Era Hollywood By Martin Turnbull

Rules of Civility: A Novel By Amore Towles

Chasing Salomé: A Novel of 1920s Hollywood By Martin Turnbull

Full Service: My Adventures in Hollywood and the Secret Sex Live of the Stars By Scotty Bowers

Tinseltown: Murder, Morphine, and Madness at the Dawn of Hollywood By William J. Mann