Built in 1787, for Barnt De Klyn (1745-1824) and his wife Mary Van Zandt (1749-1825). It was named for its position on a small hill on a bow of the Delaware River. Its most famous resident was Annette Savage, the mistress - and mother of two of the children of - Joseph Bonaparte, former King of Naples and Spain who was then living at Point Breeze near Bordentown. But after the birth of their first daughter here, De Klyn regretted allowing Annette to use the house and "stigmatized by this bastard birth" cancelled the lease. It remained in the De Klyn (and subsequently Lalor) family up until 1975 when it was purchased by Trenton's Ukrainian-American community and today it is better known as the Ukrainian American Cultural Center....
zoom_in 2 images 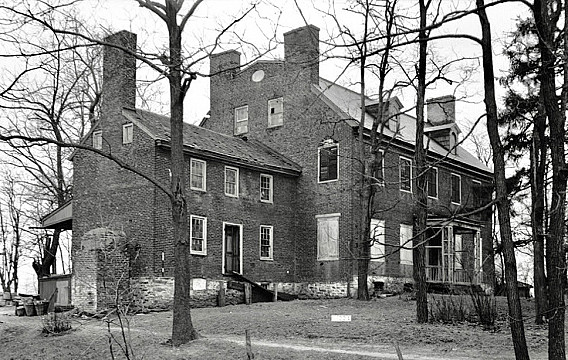 Barnt De Klyn was a Huguenot merchant born in Boston who after his marriage in 1768 settled in New York. He made a fortune during the Revolution as a wholesale merchant supplying the wool that made the uniforms for the Continental Army. Speculating that the new capital would be at Trenton - midway between Philadelphia and New York - he purchased 700-acres along the Delaware River from Major William Trent and built this mansion which was already complete by 1790 when news reached him that Washington D.C. was the new capital. Nonetheless, he and his wife remained, and are buried here.

The house is built with bricks imported from England and cement made with sand from Pennsylvania. The kitchen was housed in the small east wing. In the main house, a hallway runs from front to back, off from which stem four reception rooms. Below the string course, the side of the staircase is decorated with, "little reed mouldings running perpendicularly" and around the Dining Room table was a set of Chippendale chairs.

The Love Nest of the Imperial Eagle

In 1820, having become well-acquainted with his neighbor, Joseph Bonaparte, De Klyn agreed to lease him Bow Hill as a home for his mistress, Annette Savage, while he and his wife took up residence in New York City. Before then, Joseph had installed Annette at Point Breeze but when the murmurs of disapproval grew louder installing her here seemed a good solution. Although she only lived here for two years, her romantic connection to a former king has ensured that the early history of the house is dominated by stories of her!

It is said that the Daffodils that cover the meadows from the house down to the banks of the Delaware were planted by Annette. According to legend, while picking the daffodils there one day, a diamond ring fell from her finger which has since been the object of many a - so far fruitless - treasure hunt! This may have been the same diamond ring that she is supposed to have scratched "God is Love" into one of the back window-panes.

Another popular legend likes to tell that her bedroom here concealed a secret door by which her lover could enter unseen. But, of course, the purpose of her presence here was certainly not a secret and as the house back then was very much isolated why Bonaparte could not enter by the front door like anyone else is perhaps a dampener to this tale!

"Stigmatized by this Bastard Birth"

Despite her intimacy with the former king, Annette remained ostrasized by polite society and her time at Bow Hill, though luxurious, was undoubtedly lonely. Annette was never invited to Point Breeze while Bonaparte entertained and while she made several "pitiful attempts" to place herself within his inner circle, society ensured that she was kept on the outside and her only 'friends' were those who thought that a relationship with her might favor their position. But, despite their irregular set-up, Annette was the mother of two children by Bonaparte and he took care of her and made sure that they lacked for nothing.

Annette's landlord was not quite so charitable when it came to her illegitimate children, and "stigmatized by this bastard birth" (the birth of their second daughter, Cathrine) he terminated the lease. Tragically, shortly before leaving here in 1823, their elder daughter, Pauline, was accidentally killed by a flower pot that fell on her head.

From 1823, Annette was sent away to Watertown, New York, where Bonaparte provided her with a house on a large parcel of land he had bought there as an investment - not as a summer home as is sometimes claimed. He gave their daughter a dowry of $30,000 when she was married to her strangely Napoleon-obsessed husband, Zebulon Benton, and when he left America he provided Annette with a small estate and a business worth $12,000. However, despite the frequently told romantic claims to the contrary, when his daughter Catherine (Mrs Benton) did visit France, her Bonaparte cousins refused to meet her.

De Klyn returned to Bow Hill in 1823 and died there the following year. He left the estate, plus a considerable sum of money to his grandson, Jeremiah Lalor (1800-1865), who lived here with his wife Elizabeth Tilton Smith (1809-1875), and their several children, but "Bonaparte's stay there was always prohibited in family conversation by (their) father".

Jeremiah and Elizabeth's unmarried daughter, Caroline Lalor - whose "love for her ancient abode amounts almost to a worshipful veneration" - lived here for many years. When she died in 1908, Caroline willed the property to her sister, Julia, who was married to Andrew Barricklo of Jersey City. In 1897, their son, William Reed Barricklo, had married his cousin, Elizabeth Lalor, in the hallway at Bow Hill, but she died soon afterwards and neither he not his parents lived here. For over 50-years, the house stood empty, falling into an ever worsening state of repair. In 1975, it was purchased by Trenton's Ukrainian community who restored it and it continues to serve as the "Ukrainian American Cultural Center".

Empire's Eagles: The Fate of the Napoleonic Elite in America By Thomas E. Crocker

Napoleon in America By Shannon Selin