Completed in 1880, for Robert Goelet III (1841-1899) and his wife, Harriet Louise Warren (1854-1912). Situated on Fifth Avenue at the south east corner of 48th Street, Robert and his brother Ogden both employed the same architect, Edward H. Kendall, to build their homes in New York. In 1879, the brothers had inherited a real estate empire in Manhattan second only to that of the Astors and was then estimated at about $40 million. This house was not only an expression of that wealth, but it was also a wedding present for his wife, a niece of the Egyptologist, Stephen Whitney Phoenix....
zoom_in 2 images 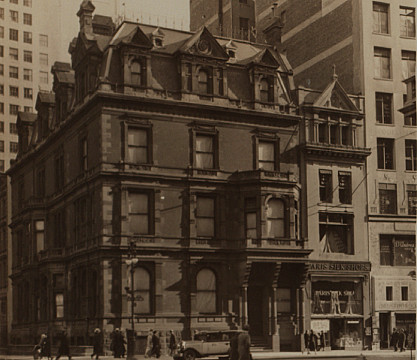 Whereas the Astor properties in Manhattan, "would have put Calcutta to shame," Robert Goelet - the more business-minded of the two brothers - was described as a "progressive" and, "exceedingly public-spirited". He, "pursued a policy of improving his properties in a manner which would beautify the city" and his own home was to be no exception.

Robert's elegant yet bulky Victorian brownstone, ornamented with carved stone griffins, may have been typical of the period on the outside, but inside his wife decorated it with glittering French antiques enlivened by several pieces from her well-travelled uncle's collection along with her own collection of tapestries. In 1884, she gave, "a little dance" here for 200-guests to introduce her youngest sister, Edith, into society.

In 1899, Robert's heart gave out while sailing off Italy on his 306-foot yacht the Nahma. His widow died in 1912 (when the house was valued at $800,000) and left everything to their only surviving child, Robert Walton Goelet, who was known as "Bertie" to differentiate him from his first cousin of the same age, Robert Wilson Goelet. Whereas the next generation of most American families of fortune at that time had a tendency to either replace their parents' houses or build new ones from scratch, Bertie Goelet did neither.

Bertie and his French wife, Anne-Marie Guestier, continued to live at No. 591 in Manhattan; they continued to summer at Southside in Newport; they carried on camping down at No. 46 Avenue d'Iéna in Paris; and, they even kept sailing on the Nahma. That's not to say he didn't develop his own individual tastes, his favorite home was the beautiful Chateau de Sandricourt fifty miles north of Paris. By the time his heart gave out while resident at No. 591 - his heart lasted a little longer than his father's - it was one of the last grand mansions that was still a family home left standing on Fifth Avenue.

Bertie's widow retained their French and Newport homes, but in the midst of war and urban progress, there was little market for old-world mansions in Manhattan. In fact, one of the very few lucky enough to survive was Bertie's aunt's house at 1048 Fifth Avenue. In 1941, an auction was held that saw much of 591's art and tapestries dispersed. Soon afterwards, it disappeared and today a glass and steel mall sits where it once reigned.

Seeking New York: The Stories Behind the Historic Architecture of Manhattan--One Building at a Time By Tom Miller