Completed in 1891, for Frederick William Vanderbilt (1856-1938) and his wife Louise Holmes Anthony (1854-1926). Situated along Newport's famed Cliff Walk, Rough Point is the 5th largest of the Gilded Age cottages behind only the likes of the The Breakers, Ochre Court and Belcourt. Aside from a Vanderbilt no less, it has been home to a Princess and "the richest little girl in the world". The socialite Bessie Drexel (1868-1944) described it as, "one of the most beautiful homes in Newport" and it was the first of the largest mansions for which Newport is now famous. Today, Rough Point is operated by the Newport Restoration Foundation as a unique 105-room house museum left exactly as it was - jewellery, paintings, furniture etc. - by its last private owner, Doris Duke (1912-1993), who rescued no less than 83 historic homes in her time....
zoom_in 15 images 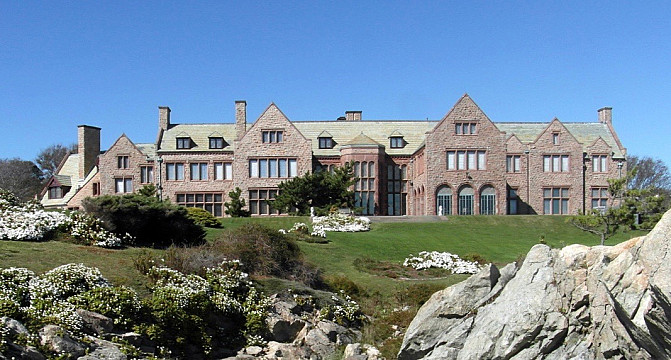 James B. or "Buck" Duke, Founding Partner of the American Tobacco Company

Frederick W. Vanderbilt was the sixth of the eight children of Billy Vanderbilt (1821-1885), the President of the New York Central Railroad etc. Billy grew the already vast fortune left to him by his father so that when he died in 1885 worth $200 million, he was estimated to be richest man in America. Frederick and his siblings used part of that fortune to build some of the most well-known mansions in America, including The Breakers, Marble House, Biltmore etc. In 1886, Frederick became the first in his family to build from scratch at Newport when he purchased a 10-acre estate overlooking the sea.

In 1878, Frederick and Lulu had been married in secret, against the wishes of his father. Lulu's mother came from a well-respected Rhode Island family, closely connected to the now not-so respectable DeWolfs of Linden Place, while her father had counted Frederick's father among the pallbearers at his funeral. But, despite the friendliness and equal social standing of the two families, Lulu was... a divorcee! But, she hadn't just divorced anyone to marry Frederick, she had divorced Frederick's first cousin, the playboy Alfred! A popular rumor adds spice to the story by saying that she was also twelve years older than Frederick, but this is untrue: back then, a parlor maid made an off-hand comment that she "guessed" Lulu might have been twelve years older... and then old lady gossip did the rest!

To get an idea of the significance of her divorce at that period, this was all happening some 20-years before Frederick's indomitable sister-in-law, Alva Vanderbilt Belmont, rocked Gilded Age Society by divorcing his brother Willie K. So, it wasn't surprising when Billy Vanderbilt heard about Frederick's intentions with Lulu that he threatened to disinherit him. As such, the newly-weds waited a month before breaking the news.

Frederick wasn't disinherited, but when Billy built the Triple Palace in Manhattan for himself and three of his children, Frederick was fobbed off with his old brownstone - now usually referred to as the F.W. Vanderbilt Mansion - a significant ten blocks away! The King of Railroads may have ostensibly forgiven, but he had certainly not forgotten!

The First of Newport's Giants

In 1887, Frederick and Lulu Vanderbilt commissioned Peabody & Stearns to design their Tudor-inspired sandstone and granite summer house, while the gardens that stretched down to the cliffs were laid out by Frederick Olmsted. Inspired by its earlier neighbours, Wakehurst and Vinland, the mansion cost $1 million to build and was completed in 1891. The Vanderbilts moved in the following year and christened their home "Rough Point" for the waves that crashed into the cliffs at the foot of their lawns.

During its construction, Rough Point was the most talked about house in Newport, despite being rapidly eclipsed by the likes of Ochre Court and Marble House. The principal feature of the 49-room mansion's interior was its vast 2-story Gothic entrance hall, and this was humorously referred to in an article that appeared in The New York Sun of 1889:

The colossal size of Mr Frederick Vanderbilt's new house at Newport, and especially of his entrance hall, is still a topic of conversation. Sydney Smith (1771-1845) once said of an abnormally stout woman: "One might take one's morning walk round her, always supposing that one is in rude health and good physical training." And the remark would apply equally well to Mr Vanderbilt's house, the inmates of which must get all the exercise they want within its walls.

Lulu is well-remembered for her charity and she loved entertaining too. Among other events, she hosted an annual Garden Fete in aid of the Newport Society for the Prevention & Control of Tuberculosis. Frederick on the other-hand was shy and didn't enjoy the constant social parade that was Gilded Age Newport. So, from 1894 they leased Rough Point to those who better enjoyed the exclusive enclave; and, by 1906, they were happily ensconced at the Vanderbilt Mansion in New York. That year they sold Rough Point to William Bateman Leeds (1861-1908) and his second wife, Nonnie May Stewart (1883-1923).

What was fit for a Princess needed improvement for a Duke!

The Leeds' had been renting Rough Point for the previous two seasons, and on it becoming theirs they hired John Russell Pope (1874–1937) to make some minor exterior alterations. But, after having passed just one summer in their newly acquired mansion, William Leeds died at Paris in 1908. His widow, known as Nancy, ostensibly remained in Europe and in 1920 remarried Prince Christopher (1888-1940) of Greece and Denmark. Known from then on as "Princess Anastasia," she died just three years later at Spencer House in London.

In 1922, Princess Anastasia sold her Newport home to James Buchanan Duke (1856–1925) and his second wife, Nannie Holt. No sooner than they had acquired the mansion, the Dukes spent millions hiring Horace Trumbauer (1868-1938) to enlarge it, while Sir Charles Carrick Allom (1865-1947) was brought in to renovate the interiors. Trumbauer used Rough Point for inspiration on another of his projects, Ronaele Manor.

By the addition of an east wing, the length of the house was almost doubled, as were the number of rooms that now numbered 105. In 1925, Duke died and left his all his residences, plus his $100 million fortune to his only daughter, the thirteen year old Doris Duke (1912-1993), who was immediately dubbed, "the richest little girl in the world".

"The Richest little Girl in the World"

Doris and her mother continued to summer at the house, but by the 1950s she was often abroad and her mother advised her to donate the property to a suitable charity. Doris twice attempted to donate it to the Newport Hospital but failed and after her mother died in 1962, she resumed spending three months of every summer here for the next 30 years.

Once the mansion was back in use, Doris began to refill it with old family heirlooms and hundreds of pieces of priceless art that she herself had collected. Among the many treasures - that can still be seen there today - are paintings by Renoir, Gainsborough, Reynolds and van Dyck; Chinese porcelain vases from the Ming Dynasty (1368-1644); 16th century French and Flemish tapestries; and in the Yellow Room, side tables with ivory insets bearing the Russian Imperial crest of Catherine the Great (1729-1796).

To add to her interests in horticulture, art and philanthropy, Doris established the Newport Restoration Foundation in 1968. Through this organization, she financed the salvation of no less than 83 historic buildings in the Newport area. When she died in 1993, she left Rough Point along with all her clothes, jewellery and furniture within to the Foundation. Since 2000, her home has been operated as a house-museum, unique by the fact that it has been left just as it was when she lived there. However, if you're looking for a gift shop here, you won't find one: Doris declared she found them to be "in bad taste"!

Rough Point: The Newport home of Doris Duke By A. Bruce MacLeish

Consuelo and Alva Vanderbilt: The Story of a Mother and a Daughter in the Gilded Age By Amanda Mackenzie Stuart

Too Rich: The Family Secrets of Doris Duke By Jason Thomas & Pony Duke

Bernard and Doris By Susan Sarandon and Ralph Fiennes

Trust No One : The Glamorous Life and Bizarre Death of Doris Duke By Ted Schwarz & Tom Rybak