Built in 1850, for William Henry Willis (1808-1891) and his wife, Lydia Waring (d.1866). Situated just south of New Hamburg and commanding a magnificent view over the Hudson, the estate is known today as "Carnwath Farms Historic Site & Park". The house was originally designed in the Italianate style by the celebrated Andrew Jackson Downing and was enlarged in the 1870s. It remained in the same family for nearly 60-years during which time it was also referred to as "Rives Hill" and contained one of the most impressive collections of carriages and carriage-horses in New York....
zoom_in 3 images 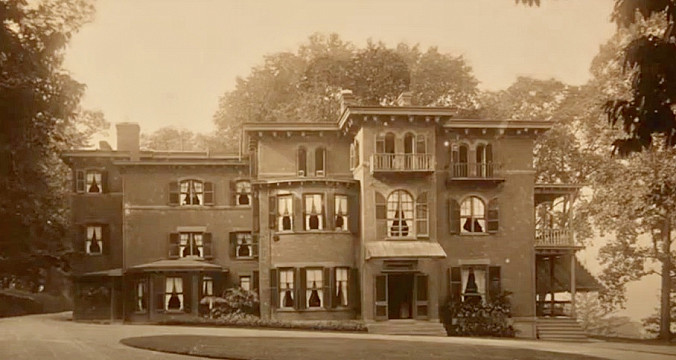 William Henry Willis came from Quaker stock on both sides of his family and reputedly made his fortune as a hardware merchant in New York City. But if the Willis' had been thinking of retiring in the house they built here, they changed their minds pretty quickly. Just five years after it was finished (1855) they sold up and built Obercreek in the Federal-style half a mile to the north between Wappingers Creek and Hughsonville.

In the Spring of 1855, the Willis' sold their 'old' home to George Barclay who was not a General as he is often referred to, but being a grandson of Peter DeLancey he did count among his family many of the leading names in old New York society. Barclay had retired from business life in the city in 1854 and lived between here and his townhouse in Manhattan that adjoined that of 'Commodore' Vanderbilt's at 10 Washington Place.

It was the Barclays who named the house "Carnwath". George's English wife, Mrs Louisa (Aufrère) Barclay, was the maternal grand-daughter of a distinguished Scottish soldier and Count of the Holy Roman Empire, General James Lockhart, of Lee and Carnwath in Lanarkshire. Her uncle, Sir Alexander Lockhart, succeeded to the estates of Lee and Carnwath (held by the Lockhart family since the late 17th Century) and was created a Baronet in 1806. The Scottish village of Carnwath occupies a similar situation above the River Clyde as that of its American namesake above the Hudson and perhaps this shared geography made "Carnwath" the natural choice of name for their new country home.

Arrival of the Rives

The house as designed by Andrew Jackson Downing was originally covered in white stucco and was similar in style to Nuits at Irvington-on-Hudson. The Barclays doubled the size of the estate's acreage to 200-acres, built two new barns, and employed 100-farmhands to make it a viable farming concern. George survived his wife and died at Carnwath in July, 1869. He had just one daughter Matilda, and the estate now passed into the ownership of her husband, Francis Robert Rives, a native of Virginia who became a lawyer in New York after having served as Secretary to the U.S. Legation at the Court of St. James in London.

From the very get go, Francis, Matilda and their children had been as much a regular part of life at Carnwath as Matilda's parents: their fourth child, Maud, was born here in July, 1855, only a handful of months after her grandfather had purchased the property.

Francis also inherited his father-in-law's previously mentioned townhouse at 8 Washington Place and the family continued to divide their time between the two homes. In 1873, Francis employed George Browne Post to make several improvements to Carnwath, also now referred to as "Rives Hill," adding: an ice house; a 3-story carriage house in the French Second Empire style that had reached the peak of fashion in the 1870s; and, enlarging the main house through the addition of an east wing, servant's quarters, and a large kitchen wing on the south side. A 2-story bowed addition was added next to the entrance and the stucco was stripped off to give it its uniform brick finish.

In 1872, Francis had reached the pinnacle of the American aristocracy when he was invited to join "The Patriarchs," an exclusive group of 25-men who deemed themselves to be the most important in society, joining the likes of John Jacob Astor III, William Backhouse Astor, Jr., Lewis Rutherfurd etc. Accordingly, life at Carnwath became equally glittering and relatives frequently wrote about the parties hosted here. Francis was also Vice-President of The Coaching Club of New York and during the season Carnwath became a favorite stopover point as the club members dashed their way up to Lenox, Massachusetts.

Unravelling of the Rives

Francis died at Carnwath in 1891 leaving an estate estimated at $3-million to be divided between his five surviving children - Carnwath was part of his estate, not the whole of it as is sometimes erroneously claimed. It was, however, specifically bequeathed to his youngest son, Reginald W. Rives, who was already living here with his first wife.

Reginald also inherited his father's passion for coaching and for 15-years was President of the Coaching Club and General Manager of the National Horse Show Association in America. He was recognized as a leading four-horse coachman and at Carnwath, "he became an ardent farmer and devoted himself to the development of his property on a business basis... maintaining a noteworthy stable of harness and saddle horses".
In 1909, Reginald, President of the Dutchess County Agricultural Society and Vice-President of the State Agricultural Society, found himself in the embarrassing position of being sued by his gardener - William Wilson - for false arrest and slander. Carnwath had been burgled and Rives immediately laid the blame on Wilson: "Wilson, I'm not going to mince matters. You did this, and I want you to confess". But, the case was quickly thrown out of court in Wilson's favor who then sued his former employer for $20,000 damages.
In 1910, Reginald's wife threw him out of their townhouse in Manhattan (42 East 31st Street) and he was told to "never enter it again or she would throw his things out on the sidewalk". They were divorced in 1912 and the proceedings revealed very publicly quite how much his wife had grown to dislike and disrespect him. So, when he was ousted as a vestryman at the family church in Wappingers Falls in the same year, his humiliation was complete - although it somewhat backfired on the church when his two younger sisters quit the congregation too, leaving the church decidedly worse off financially.

It was perhaps not entirely surprising when news broke in May, 1914, that Reginald had sold Carnwath and its 200-acres and was moving to Santa Barbara, California. At the sale, the estate was described as having, "nearly a mile front on the river and a 25-room brick dwelling with stables, lodge, cottages, greenhouses etc.". The new owner was the controversial New York attorney Isaac Untermyer who shot into the limelight as the defence lawyer for Mayor "Boss" Tweed, the famously corrupt leader of Tammany Hall.

Untermeyer (along with his brother, Samuel) retired in 1912 from the law firm that had previously been known as Guggenheimer, Untermyer & Marshall and Isaac then divided his between Carnwath and 300 Park Avenue with his wife and sons. He bred Guernsey cattle here and raced his powerboat "Carnwath" at Palm Beach.

The Untermyer family remained here until 1925. In the year before Isaac died, he sold the estate to Order of the Brothers of Hermits of Saint Augustine. They moved into the main house, added the Chapel in 1950, and played basketball in the Carriage House. In 2003, the house, outbuildings, and 99.7-acres of parkland was renamed "Carnwath Farms" and the dormitory erected by the monks in 1927 is now the Frances Reese Cultural Center that since 2005 has been home to the Sports Museum of Dutchess County. Today, the picturesque parkland and the Reese Cultural Center (the Sports Museum) are open to the public but the manor remains closed - boarded up, and a shell of its former self.

The Hudson River School: Nature and the American Vision By Linda S. Ferber

The Social Graces By Renée Rosen