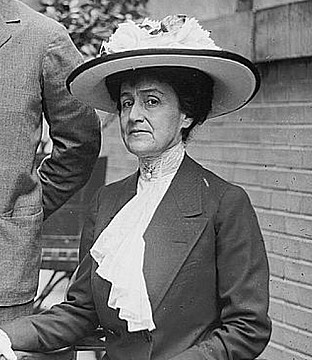 She was born at 29 Monroe Place, Brooklyn, five years after her self-made father had been made a partner in McKesson & Robbins, the wholesale druggists who became one of the first firms to start manufacturing as well as supplying drugs. In 1882, she married Henry T. Sloane, a Director and Treasurer of W. & J. Sloane, the interior decorating and furnishing business started by his father. Henry's brother, William, was married to Emily Vanderbilt and lived at the Vanderbilt Triple Palace while he and Jessie made their home a couple of blocks away at 54th Street. In 1894, he built 9 East 72nd Street, but it was not to be a happy family home. Sometime in the mid 1890s, Jessie began an affair with Perry Belmont and she shocked society to the core when she became Mrs Belmont just six hours after Sloane divorced her for adultery.

The terms of the divorce as laid down by Sloane were anything but amicable: He was granted, "custody and full control of the children" - their 15-year old and 10-year old daughters. Jessie was, "to have no right of access to them until they shall have attained the age of 21 years," nor was she even permitted to acknowledge them in passing on the street. Furthermore, while Jessie was denied the right to remarry until Sloane had died, Sloane on the other hand was allowed to remarry at his own will. However there was of course a caveat to her being able to remarry - she was not allowed to marry anyone in the State of New York. Perry Belmont was no slouch and a lawyer to boot. Six hours after the divorce was signed, he and Jessie were married at night in Greenwich, Connecticut.

After a long honeymoon in Kentucky and Europe, the Belmonts returned to New York but the more conservative members of society continued to snub them. In Paris in 1908, they made headlines when Ambassador Henry White and his wife refused to receive them; and in Washington they had a powerful enemy in First Lady Mrs Theodore Roosevelt.

They lived at 580 Fifth Avenue, New York, and in 1909 they built the jaw-droppingly sumptuous Perry Belmont House in Washington D.C., where they entertained for two months every winter while spending the summer season in Newport at By-the-Sea. Jessie had been noted as an "ambitious" society hostess when she was younger, but despite her position being somewhat derailed by her divorce her new husband's millions still allowed her to sparkle: she possessed one of the most valuable collections of jewellery in the country and Tiffany's often asked her to model their diamonds at various events. She also wore the world famous (and ill-fated) Hope Diamond on one occasion.

By the 1920s, they began to spend increasingly more time in Paris. After the Wall Street Crash, they closed their homes in New York and Washington, auctioned off much of their art and furniture, and moved into a suite of rooms at the Hôtel Ritz in Paris. She died there in 1935, survived by her husband and both daughters: Jessie married George Dunton Widener Jr., whose father lived at the legendary Lynnewood Hall but went down with the Titanic; and, Emily, married Baron de la Grange, of Château de La Motte-au-Bois.

In her will, she left only jewellery: her famous emeralds were left to her husband with the request that he give them to a member of the Belmont family; various pearls, tiaras, and pearls set in diamonds were left to her daughter, Baroness de la Grange; and, all her remaining diamonds were left to her nephew, Warren D. Robbins. Noticeably absent from her will was her eldest daughter and namesake, Mrs Jessie Widener, which no doubt had something to do with her decision to abandon her children to marry another man.