Completed in 1908, for George Lockhart Rives (1849-1917) and his second wife, Sara Swan Whiting (1861-1924). Their classical, limestone Beaux-Arts townhouse was designed by one of New York's most famed architectural duos, Messrs. Carrère & Hastings. However, the upper three floors were a much later addition, seamlessly fused onto the original house between 1958 and 1962 by Greek architect Pierre Zannettos when it was repurposed as the Greek Consulate, as it remains today....
zoom_in 7 images 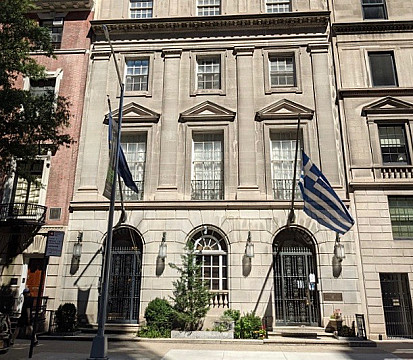 George L. Rives counted among his ancestors some of the most distinguished names in old New York and Virginia, eg., William Byrd of Westover and Peter DeLancey. He grew up as the neighbor of Cornelius Vanderbilt in Manhattan and at Carnwath. On graduating from Columbia he furthered his education in England at Trinity College, Cambridge, and his distinguished legal career saw him become Corporation Counsel to the City of New York; President of the Commission to revise the Greater New York Charter in 1900; President of the New York Public Library; President of the Board of Governors of New York Hospital; and, U.S. Assistant Secretary of State under President Grover Cleveland.

His first wife, Caroline Morris Kean, died in 1887. Two years later he married Sara, whose first marriage to Oliver Belmont in 1882 was over by 1883: On Honeymoon in Paris, Belmont's absinthe-fuelled tirade against his terrified new wife was followed by a spree of gambling and whoring before Belmont ditched her altogether in favor of a dancer with whom he hot-footed off to Bordeaux... Whereas Belmont later found love with the equally feisty Alva Vanderbilt, Sara found love with the intellectual and reliable George Rives.

Back in 1909, a writer for the Architectural Record likened the Rives house to those on Paris' Place Vendôme - those of you frequent the Ritz will know it well. This has stuck, but the description is in fact misleading. There are of course some Classical similarities, but if it was to be transported onto the 17th Century Place Vendôme the Rives house would immediately stick out like a sore thumb; whereas, if slotted among the late 18th/early 19th century mansions of London's St. James', no-one would blink an eye.

There's nothing to suggest that Rives asked the architects for something 'London,' but it's worth noting his connections to London: His father had been Secretary to the U.S. Legation at the Court of St. James; and, he vacationed in London between semesters at Cambridge, notably with his great-aunt, Mrs Mary Steuart, on Berkeley Square in 1868.

The house built by Carrère & Hastings is quintessentially 'London' and yet its immediate inspiration may have been far closer to home: Three blocks to its east was another building that was finished just five years before work started here: The Yorkville Library at 222-224 East 79th Street was the first of the ubiquitous Carnegie libraries, and the last work of its architect, James Brown Lord, who died in the same year it was completed (1902). There are differences, but overall the library possesses a distinctly similar style to the Rives house - or certainly the original design before it was enlarged in the 1960s.

George Rives knew a thing or two about architecture. He was a great friend of Charles McKim who he employed to build the carriage house at his summer home, Swanhurst; and, as a co-founder, President and trustee of The New York Public Library (NYPL) and Chairman and trustee of Columbia University, Rives consulted frequently with McKim on the campus buildings at Columbia and the projected NYPL building at 42nd Street.

Through their longstanding friendship, McKim had expected to be handed the commission for what became Carrère & Hastings's most famous undertaking - The New York Public Library. Perhaps McKim was then not as surprised as he might otherwise have been when he was passed over again by the same architects to build his old friend's new home.

The limestone house is slotted into a space that was previously occupied by three brownstones. It originally stood four stories high with a mansard roof hidden behind a balustrade and the ground floor level was given an unembellished smooth finish which has since been rusticated in the classical style as on the Yorkville Library. There are two front doors on street level either side of a central window and both screened by ornate iron gates. The main entrance was through the door on the right marked No. 69. It opened into a central hall with a large open stairway on the left and behind it was the Dining Room at the back of the house above the basement kitchen. Staff and tradesmen were directed through the door marked No. 67 that led directly down into basement.

The pedimented floor-to-ceiling windows on the first floor illuminated the library which stretched across the full width of the house and behind it was mirrored the equally sized  Drawing Room. Inside Rives had retrofitted the "fine mahogany" doors and one of the "striking marble places" that started life in his childhood home (sold by the family in 1892) built by his grandfather - George Barclay - that on the outside was identical to its neighbor 10 Washington Place, built at the same time for 'Commodore' Vanderbilt.

George L. Rives clung on to life just long enough to see all four of his children married but finally succumbed to a long illness in 1919. Later that year, his widow leased their townhouse to Robert Livingston Gerry Sr. and his wife Cornelia, daughter and co-heiress of the railroad titan E.H. Harriman - the same who built the colossal Arden House.

Gerry was the brother of the Senator from Rhode Island, Peter Goelet Gerry. Among their great-grandfathers they counted: U.S. Vice-President and Signer of the Declaration of Independence Elbridge Gerry; early real estate developer Peter Goelet; and, as though to confirm their place within American aristocratic society, Maturin Livingston, a brief resident of the Mills Mansion at Staatsburgh. Robert and Cornelia lived here with their four sons and twelve servants with weekends spent at Aknusti, their 65-room mansion in the Catskills. It was perhaps not coincidental that they were drawn to No. 69 as Thomas Hastings was also the same architect behind Aknusti and Arden House.

Mrs Rives died in 1924 and two years later her family sold the house to the Gerrys who promptly added a squash court for Robert and the four boys. Their ample fortune allowed them to sail through the Great Depression unaffected while their less fortunate neighbors fell victim to real estate development. But, their money was of little use when a devastating fire ripped through Aknusti in 1953, taking with it millions of dollars worth of family antiques, silverware and art, as well as innumerable personal mementoes. On Halloween in 1957, Robert died only a spooky few hours after his brother and by the next year (1958) his widow had sold their townhouse to the Greek government for $300,000.

On taking possession of the property, the Greeks commissioned the architect Pierre Zannettos to enlarge the house to its current stature by adding three further floors while converting the interior for its new purpose as the Greek Consulate and giving the ground floor exterior its present rusticated appearance. After four years (1962), Zannettos completed his masterclass in historical repurposing by blending the old with the new in seamless perfection. The house has served as the Greek Consulate ever since.

Art Hiding in New York: An Illustrated Guide to the City's Secret Masterpieces By Lori Zimmer

The Gilded Hour By Sara Donati

The Social Graces By Renée Rosen