Completed in 1896, for Commodore Elbridge T. Gerry (1837-1927) and his wife, Louisa Livingston (1836-1920). Situated on the south east corner of Fifth Avenue and Sixty-First Street, following the style of the Gothic Louis XII wing at the Chateau de Blois it was designed by Richard Morris Hunt and was regarded by one influential critic as, "distinctly the most interesting and the most successful" of his townhouses. The Gerrys were leaders of Gilded Age society and the parties they hosted here were noted, “for their distinction and exclusiveness,” also allowing guests a view of Gerry's collection of 30,000 rare legal books that today form the nucleus of the Library of the U.S. Supreme Court. After Gerry died, the land was leased to a group of investors who replaced it with the elegant Hotel Pierre that still stands over Central Park today....
zoom_in 9 images 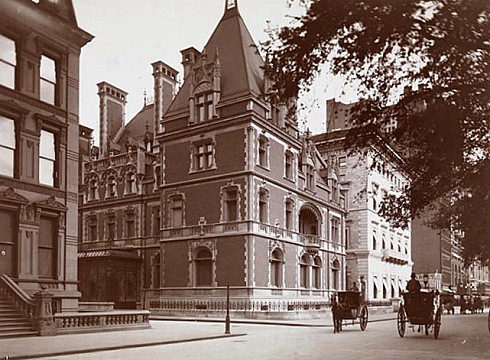 Commodore Gerry was named for his grandfather, the 5th Vice-President of the United States, Signer of the Declaration of Independence, and the man who gave rise to the political term 'gerrymandering'. But, the family may just have well have given rise to another term, 'gerrymarrying'. The men in the Gerry family developed quite a knack for marrying women with considerably larger fortunes than themselves: the Vice-President married a granddaughter of Jacob Walton; the Commodore's own mother was a Goelet; the Commodore himself married a Livingston who was a granddaughter of Garrit Storm, one of New York's earliest millionaires; their eldest son married a daughter of old Ned Harriman; and, their youngest son married the widow of George Washington Vanderbilt.

As their property empire grew proportionately with every empirical marriage, the Gerrys were able to chart a course through life that allowed them to focus on what they were passionate about. But the Commodore wasn't merely content to literally sail through life, he had a successful career as a lawyer defending the rights of the most vulnerable in society. He was counsel to the Society for the Prevention of Cruelty to Animals, but is best remembered for taking on the first case of child abuse in the U.S. that led him to establish the New York Society for the Prevention of Cruelty to Children - one of the first child protection societies in the country. He was its President for 20-years and its legal advisor for life, in the meantime helping to pass numerous laws to protect children.

Elbridge Gerry was quick to point that his new home would, “not be a palace, but simply a comfortable modern home.” As co-heir to several sizeable fortunes and a first cousin of the man who'd just put up Ochre Court, it may have been just that to him but other mortals can be excused for seeing it somewhat differently. Gerry purchased the 27,000-square foot lot (100-feet on Fifth Avenue and 175-feet on 61st Street) that covered half a block from the estate of the late Louis Carré Hamersley whose widow had since become the 8th Duchess of Marlborough. On completion, his brick and limestone chateau stood three stories high over a basement and was topped by a dormer roof. It measured 99.4-feet by 144-feet, allowing for 57,254-square feet of living space - not including the basement.

Work began in 1892 and while the exterior was finished by 1895, the interior wasn't finished until the following year and the housewarming wasn't held until January, 1897. The total cost was said to have come in at $3-million. The Gerry's art dealer in Paris, René Gimpel, recommended the firm of Carlhian & Beaumetz (the same who made six throne chairs for the coronation of King Edward VII and much of the furniture at the Collis P. Huntington mansion and Miramar) to make some of the furniture at the Gerry mansion; and, the French government gave permission for the firm to borrow pieces from various museums and palaces to be copied in some cases, and to serve as inspiration for others.

Gerry clearly had a talent with people, even proving himself to be so modern as to have consulted with the relevant members of his household staff for their input on the design of the rooms in which they would work; and, in 1899, he wrote to Richardson & Boynton to, "express my great satisfaction with your admirable system of perfect warm air furnaces recently placed in my house... during the entire cold weather of the late winter (one of the coldest in the history of New York), even during the blizzard, my house has been thoroughly heated. The heat is uniform and the ventilation perfect". Fires were always a concern and Gerry held drills regularly which paid off in 1900 when the staff successfully extinguished an electrical fire without any help from the fire services.

"Distinctly the Most Interesting and Most Successful"

In 1895, Montgomery Schuyler - arguably the most important American architectural critic of his era - paid the house a rare complement: “to me, the latest of Mr Hunt's town-houses... is distinctly the most interesting and the most successful”. Its main entrance was through the ornate - and very Parisian - wrought iron and glass porte-cochère on 61st Street, constructed by six French ironworkers brought over especially. What was less French was that they were the only members of the 66-strong workforce not to strike in 1894 over the use of imported marble for the mantels - the workers only returned when a written guarantee was given that all the marble for the lintels would be quarried locally.
The main hall was reached from the vestibule after ascending a matching pair of sweeping marble staircases. In the hall was another staircase that wound its way up to the top of the house, and an elevator for those less inclined to walk. Immediately to the left of the hall was the Dining Room that could fit 24 'small' tables of 6-8 guests for large parties. This room ran from the front to the back of the house and at the back on the right, doors opened up into the Library that held Gerry's collection of 30,000 books. The Library opened into the art gallery that occupied the rear south western corner and also doubled up as a ballroom. The art gallery and the Drawing Room overlooked Fifth Avenue and the latter room occupied the corner of Fifth and 61st, reconnecting to the front entrance hall.

The second floor was entirely devoted to the family bedrooms and each one had its own bathroom and servants' room attached. Mrs Gerry's boudoir overlooked Fifth Avenue from the center bay windows set back in an arched recess with a balustraded balcony. "Most of the (nine) bathrooms have white-tiled floor and walls and oak cabinet-work, but the boudoir bathroom is finished with rose-colored tiles, mosaic floor, and rosewood cabinet-work, the metalwork being of ornamental design, silver-plated, and the porcelain decorated in white. The bathtubs are of porcelain and enamelled iron".

Rooms on the third floor included Gerry's study and the "isolating room," designed to be "a complete hospital in itself" should any member of the household contract a contagious disease. The dormer roof on the floor above contained the servant's rooms; and, to give some idea of the overall scale, the two chimneys above the 61st Street gable rise up another 40-feet from the cornice and the bill for the masonry work alone was $250,000.

"The Admiration of New York"

A glimpse into the everyday life of the Gerry family at home was given in 1906: "the corps of servants includes a full kitchen force under a high-priced chef. Everything at the Gerry entertainments is made in the house and caterers are not employed. The Gerry footmen are the admiration of New York. They are very tall and match in size. Such men, even for ornamental purposes, command wages from $40 to $60 a month. Mrs Gerry and her daughters have each a maid, and there are second men and a numerous corps of household servants... The Commodore himself, who is a noted epicure, has his pickles and sauces and preserves put up specially for him in London or imported from India".

By 1899, Mrs Gerry was among an exclusive group that included Mrs Whitelaw Reid, Mrs William D. Sloane, Mrs Ogden Mills, Mrs John Jacob Astor, and Mrs Cornelius Vanderbilt that had come to dominate New York society, eclipsing Mrs Stuyvesant Fish and Mrs William Astor. The annual ball given by the Gerrys was a much-prized invitation and several hundred guests were given dinner at tables in the dining room and library before the rooms were cleared for dancing in the library and art gallery that, "practically turned into one long room". It was said, Mrs Gerry and Mrs Mills, "used to boast that they could give dinner for an hundred without calling in help. There were hand-painted individual place cards at every place and between every two guests there was an elaborate French menu in front and a powdered-haired, knee-breeched, liveried English footman behind".

"Without... Gerry, One Shudders to Think"

Aside from good food, the Commodore was well-known as the owner of what was generally acknowledged to be "one of the the finest" law libraries in the country. He amassed a collection of 30,000 volumes, all housed in the library, that included rare English and American legal books as well as those on history, politics and legislation - plus a handwritten menu book of the meals served to the Gerry family from November 1918 to May 1919. After he died, his son Peter gifted the collection to the Library of the U.S. Supreme Court, prompting a grateful remark in 1959 that, "without Thomas Jefferson and Peter Gerry, one shudders to think what the Supreme Court library would be today".

Ça Pourrait Être "Pierre"
Mrs Gerry died here in 1920 and the Commodore continued to divide his time between the chateau; Seaverge in Newport; and, Lake House, his late wife's ancestral estate in the Catskills. At the end of January, 1927, age 89, he slipped on one of the chateau's meticulously polished floors, broke his hip, and was dead within three weeks. By that time, all his children were comfortably installed in their own homes (notably his eldest son in the Rives-Gerry House) and the chateau sat empty for two years before they leased the land with permission to build to a group of influential investors among whom was the Gerry's son, Robert Livingston Gerry, and "Mr Monopoly" himself, Otto Kahn.

Almost exactly two years after the Commodore's death, "the most interesting and most successful" of Richard Morris Hunt's townhouses was reduced to rubble and in its place sprung up the elegant 41-story "Hotel Pierre" that still stands over Central Park today. Gerry Estates Inc. (of which Robert Livingston Gerry was still president) continued to own the land until 1938 when it sold the title to the Getty Realty Corporation for an undisclosed sum, "well above the assessed valuation of the land which is $1.9-million".

The Maid: A Novel By Nita Prose