Completed in 1879, for William Kissam Vanderbilt (1849-1920) and his first wife, Alva Erskine Smith (1853-1933). Overlooking the Connetquot River opposite Westbrook, they built this 60-room villa in the stick/Queen Anne-style. Made entirely of poplar and pine it took one year to build at a cost of $150,000. It marked the first of many occasions that Alva would collaborate with the architect Richard Morris Hunt although this was decidedly less grand than what was to come and she referred to it as, "a simple cottage". It was entirely lost to fire in 1899 and was replaced by Idle Hour, Richard H. Hunt's Beaux-Arts mansion better identified today with Dowling College....
zoom_in 8 images 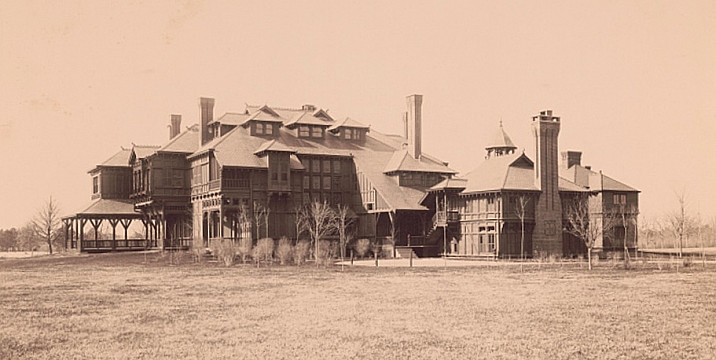 The jovial and popular Willie K. Vanderbilt came to know Islip and its environs for its fishing and hunting years before others like him began to build their sprawling estates here. Having bought 862-acres at Oakdale in 1876, he inherited $3 million the following year on the death of his grandfather ("The Commodore") and with his new wife, Alva, determined to build a weekend/country home to the design of Richard Morris Hunt.

The Vanderbilt estate was bordered by what is today the Montauk Highway to the north, Vanderbilt Boulevard to the east, the Connetquot River to the west, and the Great South Bay to the south. Hunt also added the gardener's cottage, greenhouse, stables, and two gatehouses all in the same style as the main house. Other outbuildings added during the 1880s were the work of Isaac Henry Green II. In all it was estimated that Vanderbilt laid out 10-miles of pathways and canals through his estate, stocking the dense woods of maple, pine, locust and oak with quail, and farming Blue Ribbon Angus cattle.

The mansion's singular name is taken from a line in Mark Twain's self-autobiographical travel book, Roughing It, the object of which Twain explained was, "to help the resting reader while away an idle hour (rather) than afflict him with metaphysics, or goad him with science". Both Vanderbilt and his great friend, Schuyler Livingston Parsons, had thought "Idle Hour" a very good name for their new country estates and so they tossed a coin for it: Parsons lost, and instead named his nearby estate "Whileaway". Today the Vanderbilt estate is usually always spelt "Idle Hour" but Vanderbilt spelt it, "Idlehour".

Consuelo Vanderbilt had happy childhood memories of spending the early summer and autumn months here, finding it a, "welcome liberty" from the social hamster-wheel that was New York and Newport. She described it as, "a rambling frame house close to a river (the Connetquot); green lawns swept away to the gardens, stables, woods, and farms. Here we crabbed and fished in the river and learned to sail a boat. We had ponies which I rode side saddle, and a garden to plant, but we were not gardeners, for my brother Willie, who was of an impatient nature, would pull up the potatoes long before they were ripe".

Other favorite family activities included taking picnics to Fire Island on Willie's paddle-steamer, Mosquito, and Alva and her friends were always greatly amused when Consuelo invited them to tea in the Hunt-designed playhouse. However, by the 1890s, the family dynamic had somewhat changed: when Vanderbilt learned of Alva's affair with one of his fellow members at the South Side Sportsmen's Club, Ollie Belmont, he spent an increasing amount of time in the west gatehouse (which being close to the railroad also doubled as his own train station) which then became nicknamed "the pouting house". They were divorced in 1895, the same year in which Consuelo endured more than enjoyed her honeymoon here with the Duke of Marlborough. Then in 1899, while her brother, Willie II, was on honeymoon here with Birdie Fair, it ended in early tragedy when a fault in a basement furnace started a fire which burned the house to the ground!

Once the fire was put out, only its seven brick chimneys were left standing. Fortunately neither the honeymooners nor any of the six live-in servants were hurt, but much of the furniture was lost along with "a valuable library," several family paintings and "one of the largest and most interesting collections of heads of deer and elk in this country". Vanderbilt ordered a new house to be, "hurriedly reconstructed" in brick and concrete, ie., made entirely fireproof. The result is the red brick Idle Hour that we see today which up until it went bankrupt was the principal building on the campus of Dowling College.

Roughing It By Mark Twain