Completed in 1766, for Captain Charles Stedman (1713-1784), just months after the death of his well-connected first wife, Anne Graeme (1726-1766), whose mother was the step-daughter of Governor Sir William Keith. The house is named for its second occupant, "The Patriot Mayor" Samuel Powel (1738-1793). Situated between Willing’s Alley and Spruce Street in Society Hill, Powel House is among one of America’s finest existing Georgian Colonial townhouses. Today, it operates as a house museum - though it is also available to hire for events - run by the Philadelphia Society for the Preservation of Landmarks. It has a typically colonial formal walled garden and the original 18th century interior is richly decorated and particularly exquisite....
zoom_in 9 images 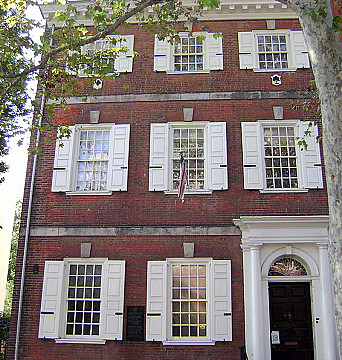 Alexander Baring, M.P., P.C., 1st Lord Ashburton; President of the Board of Trade

William Rawle Jr., President of the Common Council of Philadelphia

Charles Stedman came from a Scottish family well-established in the shipping business. He joined forces with two of his brothers, John and Alexander, importing dry goods and shipping supplies from Holland while shipping German immigrants to the American Colonies via Rotterdam and Plymouth in England. In 1745, the brothers fought for the Pretender at the Battle of Culloden and were captured. Charles and Alexander escaped to Philadelphia while John made it to Rotterdam. Charles and John then resumed their shipping business while Alexander became a Judge of the Supreme Court of Pennsylvania.

In 1761, Charles' success allowed him to purchase a lot of land on Third Street that measured 75-feet deep, 45-feet long and 30-feet wide. On it, he commissioned Scottish architect/builder Robert Smith (1722-1777) to design and build him a new 3-story home that would stand next to Governor John Penn's townhouse, afterwards bought by Chief Justice Benjamin Chew. Work began in 1765 and one short year later it was finished, complete with ornamental gardens, a kitchen garden, and several outbuildings to the rear.
Designed for Dancing

The house was designed in the English style: the rear was for the kitchens and servants; the first floor contained the drawing and dining rooms; the third floor was for bedrooms; and, the second floor held a ballroom that ran across the full width of the house. Having a ballroom must have been particularly appealing to the Stedmans who were among the earliest subscribers to the Philadelphia Dancing Assembly. Their house was also scene to several Highland reels as Stedman co-founded the Saint Andrew’s Society while his father-in-law, Judge Thomas Graeme (1688-1772) served as its President.
Stedman lost his first wife just months before the house was completed, but one year later he married the, “distinguished ornament of general society,” Margaret Bennett. By her first marriage to the British Royal Naval officer James Abercrombie, Margaret had a 9-year old son who joined his mother and stepfather in their new home. The boy grew up to be the Rev. James Abercrombie (1758-1841), D.D., best remembered for reprimanding George Washington (1732-1799) from the pulpit for not taking Holy Communion!
The Cultured & Capable Powels

A shipowner and merchant, Stedman ran into financial difficulties almost as soon as he had taken possession of his new home and was forced to put the house up for sale in 1769. It was promptly purchased for £3,150 by Philadelphia’s “Patriot Mayor” Samuel Powel. Five days later, Powel was married to the wealthy heiress Elizabeth Willing and over the 90 other properties he owned in the city, he chose this one to be their home.
Powel was the last Colonial Mayor of Philadelphia and the first Mayor elected after the Revolution. The son of a wealthy carpenter-cum-property magnate, on graduating from university in 1759 he took himself off on a Grand Tour of Europe... for seven years! He was in London for the coronation of King George III and travelled to Italy with the brother of “Bonnie Prince Charlie” where he had an audience with Pope Clement XIII. In Paris, he conversed with Voltaire; in London, he had his portrait painted by Kauffmann; and, wherever he went, he collected antiques that he shipped back by the crate to Philadelphia.
Mrs Powel grew up in Society Hill, the youngest of the four very capable children of Mayor Charles Willing. Her elder sister, Mary, was the chatelaine of the beleaguered Westover Plantation in Virginia and their eldest brother, Mayor Thomas Willing (1731-1821) was a politician and President of the First Bank of the United States. Elizabeth herself was both quick-witted and outspoken, “she will animate and give a brilliancy to the whole conversation”. From 1775, she became firm friends with the Washingtons and remained one of his closest, most trusted confidantes - politically and personally.
"A Most Sinful Feast... Every Thing which Could Delight the Eye..."

When Powel purchased the house its interiors were typically Scottish: dignified, but modest. Powel brought back the original architect and tasked him to bring it up to the standard to which he had become accustomed in the fashionable salons of Europe. No expense was spared: mahogany doors mounted by plaster pediments; a mahogany staircase; marble fireplaces; Rococo plasterwork; fluted pilasters; floor-to-ceiling wood panels etc. On completion, it was one of the most elegant townhouses in America.
The Powels enjoyed entertaining and they did so on a lavish scale. In 1779, they hosted a ball in honor of the 20th Wedding Anniversary of George Washington (1732-1799) and Martha Dandridge (1731-1802). Anyone who was anyone graced the Powel’s table at one time or another. Frequent and notable guests aside from the Washingtons included Benjamin Rush (1746-1813) and Benjamin Franklin (1706-1790) for whom Powel was a pallbearer at his funeral. The china set on display in the Dining Room today was a gift from the Marquis de Lafayette and in 1774, John Adams (1735-1826) recalled:

In 1793, the Yellow Fever Epidemic claimed Powel among its 5,000 victims. His widow retained their home for a further five years before selling in 1798 to her niece’s husband, William Bingham who lived just up the street at the stately Bingham Mansion. He bought it as part of the wedding gift for his eldest daughter, Ann, who that same year had married Alexander Baring, 1st Baron Ashburton, at Bingham Hill, one of the Bingham family’s two country estates. The Barings only occasionally used their townhouse in Philadelphia, particularly after Ann's father was widowed and moved permanently to England. One year after William Bingham died of a broken heart, they sold the property in 1805 to a wealthy lawyer, William Rawle (1759-1836), and his wife Sarah Coates Burge.
The Rawle Family

In 1783, William Rawle established what is today the oldest law firm in the United States – Rawle & Henderson LL.P. He was the well-educated and cultured U.S. Attorney for Pennsylvania and an early philanthropist. A devoted Quaker, he was co-founder and  President of the Pennsylvania Abolition Society. Washington admired him and offered him the post of U.S. Attorney-General but he declined as with all other political posts.
Rawle outlived his wife by twelve years and died here in 1836. His eldest surviving son, Samuel, was then resident in Hong Kong and so the house passed to his next son, William Rawle Jr., another talented lawyer. He lived here with his wife Mary Anna Tilghman, a maternal grand-daughter of Chief Justice Benjamin Chew, of Cliveden.
Literary Connections

In 1850, the house acquired something of a literary association: that year, the Rawle’s grand-daughter, Mary Cadwalader Rawle, was born here. Known as “Minnie,” she was the elder daughter of William Henry Rawle and his first wife, Mary Binney Cadwalader. In her childhood memoirs, Lantern Slides, Minnie recalled growing up on Society Hill. She told of her grandfather entertaining the deposed King of Naples, Joseph Bonaparte, who afterwards lived at Lansdowne House and Point Breeze. She also recalled Prince Don Angel Maria de Iturbide y Huarte - grandson of the Emperor of Mexico - and William Makepeace Thackeray as frequent dinner guests of her father during the 1850s. Aside from becoming one of the leading socialites in New York during the Gilded Age, Minnie grew up to become a published author herself and went on to marry Frederic Rhinelander Jones, brother of the Pulitzer Prize-winning novelist Edith Wharton (1862-1937).
The Decline of Society Hill

Society Hill as recalled by Minnie in the 1850s and 1860s had then peaked as the charming, peaceful preserve of the city’s old monied elite. In the years that followed, those families sought to build newer, larger mansions away from the city’s increasingly cosmopolitan center. By the early 1870s, Minnie’s father appears to have sold up to Samuel Wood Thackara (1803-1877), a city Conveyancer, and his wife, Elizabeth Alexander (1811-1886).

It was likely Thackara’s children who sold the house in 1904 to Wolf Klebansky (1859-1932). By this time, Society Hill had long since lost it genteel charm and its location on the Delaware waterfront now leant itself more to trade and industry. Klebansky was a typical resident. Describing himself as an “Importer, Exporter and Jobber of All Kinds of Russian and Siberian Horse Hair & Bristles,” he kept his factory workshop at the rear of the house and used the rest as his warehouse. In 1920, at a time when museums were looking to purchase original colonial rooms (rather than focusing on preserving the houses as a whole!) Klebansky was all too happy to sell the two finest rooms in the house – one to the Metropolitan Museum and the other (the ballroom) to the Philadelphia Museum of Art. The other rooms remained intact, as did the original mahogany staircase. But, following the Wall Street Crash of 1929, Klebansky’s business was in trouble and his nephew advocated the idea of tearing the old house down in favour of an open-air garage.
Frances Wister & The Philadelphia Society for the Preservation of Landmarks

It was at this point that the remarkable Frances Anne Wister (1874-1956) stepped in. She was the President of the Civic Club of Philadelphia and in response to the looming fate that hung over the Powel House, in 1931 she established the Philadelphia Society for the Preservation of Landmarks and raised the required $30,000 to purchase the house from the Klebanskys. It may have been saved from demolition, but then started the arduous journey to restore it from an unkempt hair-bristle warehouse back to its current 18th century splendor. Powel House became the flagship property of the Philadelphia Society for the Preservation of Landmarks that also manages Grumblethorpe, Hill-Physick House and Waynesborough. As a museum dedicated to Colonial-Revivalism, it has also played a central role in restoring Society Hill into, “one of the nation’s premier heritage neighbourhoods”. As well as being a house museum, the house is also available for events.

Philadelphia Georgian: The City House of Samuel Powel and Some of Its 18th Century Neighbors By George B. Tatum

The Best of Families By Harry Groome

World of Trouble: A Philadelphia Quaker Family’s Journey through the American Revolution By Richard Godbeer